Our HistoryPerhaps, at 28 years of age, I was too young (and foolish) to consider the financial and emotional risks of leaving a secure career at a reputable firm to start a construction company.However, I believed if I focused on my clients desires with honesty, dedication, and determination, my business would be a success.~Bill Regali, Founder ASG 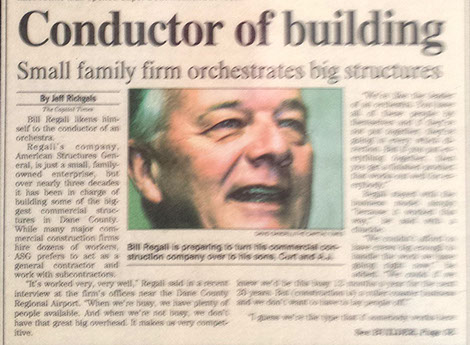 Everything Begins with Bill Regali

A ready smile, quick wit and ability to work efficiently earned him quite a few bucks and the respect of the much older drivers

The newlyweds leave Duluth, MN and head to Madison, WI

Bill believes he can make a few bucks if he delivers quality buildings, at a fair-price

2001 to present Bill Regali's enjoys the fruits of his last successful venture, retirement.